“Don’t believe everything you hear.” There’s a reason why that’s such a common statement in this day and age. With all the knowledge in the world at our fingertips, we’ve gotten lazy with how we go about gathering accurate information. If we aren’t able to find much in a few clicks, we are eager to just believe the first thing we hear. Why does this matter? Because articles are claiming that Colorado’s rafting outfitters are “eyeing safety blanket” as we approach the season, due to the “low water levels”. Well, I can’t speak for everyone, but AVA Rafting is not eyeing a safety blanket. No, quite the opposite. At AVA Rafting, we are preparing for another fantastic water year, thanks, in part, to some late season snow storms.

As I sit at my desk on Friday, April 20th in Breckenridge, CO writing my response to the Gazette article from earlier this week, we are coming off a weekend that brought 15 inches of fresh snow to the area.  We’ve reach almost 60 inches snow for the month of April, and tonight OpenSnow is expecting 8-16 more. It’s not just Breckenridge expecting snow, either. From Winter Park near the Front Range, down to Monarch Ski Area down in the Arkansas River Valley, spring storms are bringing an estimated 8 to 19 inches of snow. Even if this storm doesn’t come to be, we kicked off the safety blanket long ago. In the great state of Colorado, snow sport enthusiasts haven’t even begun to think about packing up their winter gear.

We can’t disagree with everything in the article. We also check out the snowpack almost daily, however, snowpack does not reign supreme in predicting what type of season the state will have. However, something we disagree with passionately is that the U.S. Department of Agriculture is reporting that the Arkansas River basin’s snowpack is at its lowest in nearly 40 years. Why do we disagree? Because it simply isn’t true. Snow storms from the previous weekend brought the snowpack up to 2015 levels to date. Sure, that doesn’t necessarily mean that it’s going to be a high water season, but why do we view high water season as the only good kind of season?

We’ve been thinking a lot about the 2015 water season, especially on the Arkansas River. How was 2015 on the Arkansas River, you ask? Overall, it was a great season. The snowpack in 2015 meant that we didn’t have to adjust our trips in reaction to high water. Brandon Gonski, AVA General Manager, explains further.

“When the water levels in the basin get too high, we have to raise our minimum age for trips in Browns Canyon. Sometimes, we even have to stop running certain trips because they become too dangerous. The 2015 season’s snowpack meant that we were able to run all our trips on the Arkansas River for the entire season. We also didn’t have to cancel someone’s trip because they had a 7-year-old on the Browns Canyon trip, and the age minimum was raised to 12 due to the water level. High water has a lot of appeal on paper, however, 2015 is a great representation of the type of water year that we always hope to get.” Brandon Slate, president of the Arkansas River Outfitters Association, expresses the same sentiment in the article:

“We’re not as concerned as a lot of the media (are) right now.”

Sorry to call out the media, but I don’t believe their media credentials make them the most knowledgeable of sources to translate what the water levels mean, or to predict what type of season we will have. I don’t know about the other outfitters, but I’d rather not have the media speak for AVA Rafting, as we don’t sympathize with almost anything they feel regarding snowpack.

Slate even goes on to say that adrenaline-junkies searching for a huge water year and Class V rapids may be disappointed, but outfitters love the water levels we are faced with because it means those sections that occasionally get too dangerous will be able to stay open all season long safely.

The article seems to twist the words of some very reliable sources to support the title. In the first half of the article, it seems to insinuate that Kissack is eyeing that “safety blanket” in a panic when, in fact, Kissack isn’t panicking at all, as mentioned in the closing statement. Despite having a number of positive statements from credible folk in the whitewater community, the article relies on its own narrow field of perspective to make conditions seem much more dire than they are.

AVA Rafting is looking at the snowpack with optimism and excitement, as we expect this to be the best rafting season ever. We’ve done our research and we’re counting down the days until April 28th, when we officially start rafting for the 2018 season. The Gazette may be stressing, but those of us with knowledge enough to understand the snowpack are sitting pretty. The Lower Canyon on Clear Creek 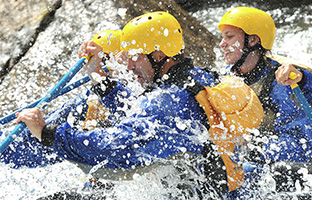